The 2017 National Hardware Show is May 9-11, 2017 in Las Vegas, NV. Come explore 15 major product categories on display by thousands of exhibitors. Legacy will showcase new innovative products that expand our brands in the Hardware & Tools, Lawn, Garden & Outdoor Living, Farm & Ranch, Automotive and Industrial categories. Visit Legacy at Booths #12246 and #6442!

Legacy™ will attend the AAPEX Show November 1-3, 2016, in Las Vegas, NV. Legacy, the maker of Flexzilla®, will gather with over 44,000+ targeted buyers and more than 130,000 professionals to learn about the future of the automotive industry. Legacy will showcase their brands: Flexzilla air hoses, water hoses, and power cords; SmartFlex™  air, garden, and RV/Marine hoses;  Lock-n-Load™  grease guns and accessories; Cyclone®,  blow guns and ColorConnex®,  couplers and plugs. Visit us at booth #2867! 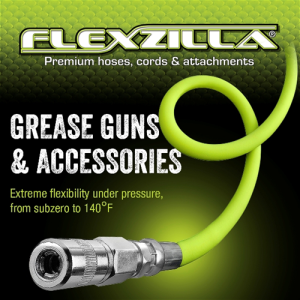 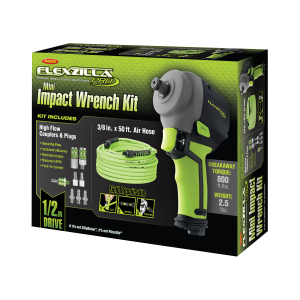 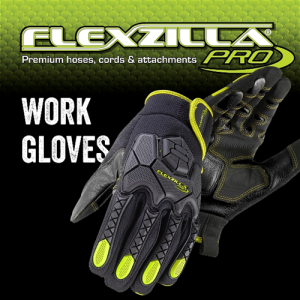 The 10th Annual Independent Garden Center (IGC) Show is August 16-18, 2016 in Chicago, IL. The IGC Show is widely recognized as single best event for garden center owners, managers and buyers. Each year the entire industry comes to buy at IGC because it has hundreds of exhibitors, thousands of new products and scores of educational opportunities. Legacy will showcase Flexzilla® SwivelGrip™ Garden Hose and introduce the new Colors™ Garden Hose, from the makers of Flexzilla®. Visit us at booth #519!

Legacy, with corporate headquarters in Marion, IA, is a manufacturer of high-quality, durable equipment for professional and domestic use.  Legacy is the driving force behind the popular Flexzilla brand of air and water hoses, extension cords and other products designed to make your work easier than ever. Leading edge technology and premium materials have established Flexzilla as the industry leader.

Venturini Motorsports is a professional motorsports team with over 40-years of experience competing in NASCAR and the ARCA Racing Series presented by Menards.

Logano, winning two races with Venturini made his NASCAR Sprint Cup Series debuts with Joe Gibbs Racing in 2008 and in 2015 became the second youngest Daytona 500 winner.

Erik Jones, also a winning driver for Venturini Motorsports, drove for the Concord, NC based team during the 2013-2014 ARCA season and is now considered one of NASCAR’s hottest commodities. Jones won the 2015 NASCAR Camping World Truck Series Championship driving for Kyle Busch Motorsports.

Other well-known drivers making their rise up the NASCAR ranks with Venturini Motorsports include Daniel Suarez, Ryan Blaney, Brian Scott, Justin Allgaier, Alex Bowman and Brennan Poole to name a few. Overall, Venturini Motorsports has assisted over 40 drivers who’ve gone on to compete in one of NASCAR’s top three series’.

Flexzilla products can be found nationwide through a variety of automotive, farm, industrial and home improvement stores – including the ARCA Racing Series’ presenting sponsor, Menards.

Flexzilla® will attend the AAPEX Show November 3-5, 2015, in Las Vegas, NV. Legacy, the maker of Flexzilla, will gather with over 39,000 targeted buyers and more than 130,000 professionals to learn about the future of the automotive industry. Flexzilla will showcase their product offering of air hoses, water hoses, pressure washer hose and accessories, custom built hose program, tire inflators, high flow couplers and plugs and power cords. We hope to see you there!

Legacy Manufacturing, the maker of Flexzilla extreme-performance water and air hoses, is building a $10.4 million facility to consolidate its operations and double its capacity.

The 133,000 square foot building will be located in Marion, Iowa — the same as its current facility — where the company has done business for over 20 years.

According to Matt Weems, VP, Legacy Manufacturing, there are two main factors driving the company’s decision to build. “We have outgrown our current facility and operate out of several locations,” says Weems. “We need the space to increase our efficiencies and support continued growth for the future. This new building helps us to supply our customers at an even higher service level.”

Also impacting the decision is Legacy’s goal to re-shore more of their products. The company expects to move into the new facility during the first quarter of 2016.

While Weems says Legacy products are available in the U.S. and Canada through multiple market channels, there are opportunities for considerable growth in many others. “We are projecting significant growth in the next five years,” says Weems.

MARION, Iowa, July 8, 2015—Legacy Manufacturing, an international work products company located in Marion, Iowa, received a Retailers’ Choice Award for its Flexzilla® Pro Air Hose during the National Hardware Show®, sponsored by Hardware Retailing magazine. Flexzilla Pro Air Hose was one of 30 products chosen from among 5,000 to receive the award by a panel of home improvement retailers appointed by the magazine. The panelists look for unique products and packaging, and products that have strong sales potential.

This is the second time the Flexzilla Pro line of hoses has received recognition. It was also a winner for product innovation in the 2013 Product Showcase at the Automotive Aftermarket Products Expo. 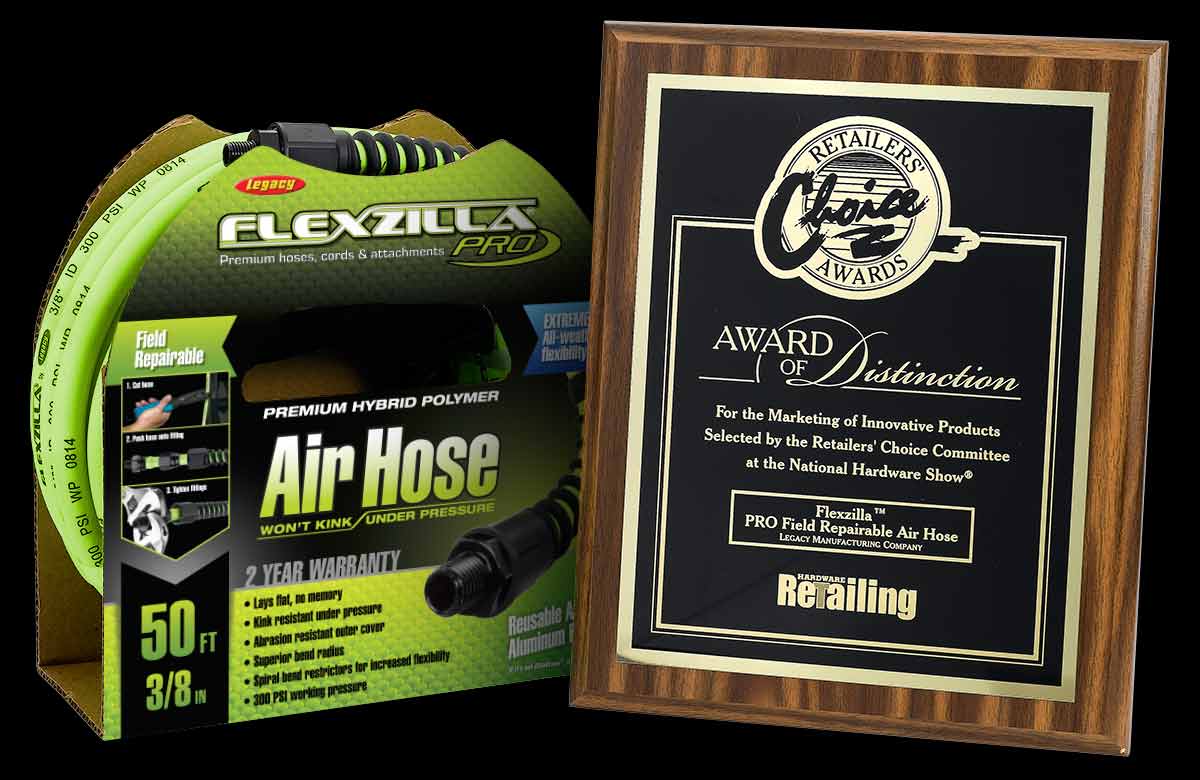 “It’s an honor for our product to be recognized and appreciated as leading‐edge by customers in two different industries,” says Legacy’s VP, Matt Weems. The hose’s unique design allows for the ends of the hose to be replaced in the field if they are dysfunctional or worn. This can prevent down time on the job and save money because the hose can be repaired rather than replaced. Flexzilla Pro Air Hose can also be tailor‐made for a job. A custom length of hose can be purchased through a distributor.

Flexzilla® Pro Custom Hose Center allows the consumer to build a custom length air or water hose for a specific application.  The custom hose center is available as a free standing or a Lozier compatible display.  It can be stocked with spooled Flexzilla Pro bulk hose in ¼ in., 3/8 in., ½ in. Air or 5/8 in. Water Hose and all the fittings to match.  “We believe the professional likes having choices available to them when buying their tools and equipment.

The Flexzilla Pro custom hose center places a lot of options in the professionals hands so that they get exactly what they want” says Matt Weems, VP, Legacy Manufacturing Company.

Flexzilla® Pro hose is made of premium hybrid polymer material that has zero memory and is kink-resistant under pressure, providing all-weather flexibility in extreme temperatures, from -40 to 140 degrees. The hose ends are reusable and the hose itself can be repaired quickly in the field by using a splicer or cutting out the damaged section and reattaching the hose end. Hose ends can also be replaced if worn or damaged.

Legacy Manufacturing Company is an international business located in Marion, Iowa that specializes in durable and innovative products including Legacy equipment for the automotive and industrial markets, Flexzilla hoses, cords and attachments, SmartFlex™ air, RV/marine and garden hoses, Lock-n-Load™ grease guns and ColorConnex®, an easy color matching system of couplers and plugs. Legacy Manufacturing is a division of Weems Industries, founded in 1986. For more information, visit legacymfg.com. 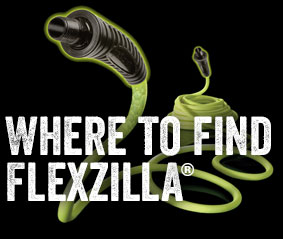